Two articles – one written by Professor Claire Maxwell and the other by Associate Professor Benedikte Brincker – present new sociological insights into nationalism. Both articles appear in the leading journal Sociology, as part of a special issue examining 'nationalism’s futures'.

Nationalism is a topic of growing academic interest as nationalist sentiment has been on the rise in recent years. Brexit, Trumpism and the strengthening of political forces using nationalist rhetoric are just a few current manifestations. 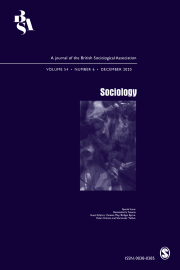 Consequently, the flagship journal of the British Sociological Association, Sociology, has dedicated a special issue titled ‘Nationalism’s Futures’ to take stock of how sociology can contribute to understanding the past, present and future of nationalism.

Here, two researchers from the Department of Sociology, Associate Professor and Head of Department Benedikte Brincker and Professor Claire Maxwell, were selected to contribute.

The first, by Brincker is primarily a theoretical article that offers a new analytical framework through which to think about nationalism. The second, by Maxwell and international collaborators examines practices of nationalism among globally mobile middle-class families.

Roles of institutions and agency in nationalism

In her contribution, Benedikte Brincker analyses and develops sociology’s contribution in helping to understand the emergence and development of nationalism – a field which sociology has struggled to come to terms with. As she writes:

“Sociologists were not called on to account for and explain nationalism. Instead, they were expected to contribute to an understanding of how and why nationalism had run its course. However, this changed with the second decade of the 21st century witnessing a sharp increase in nationalism.”

Against this backdrop, Brincker pinpoints three propositions that form the core of an emerging analytical framework with focus on the roles of institutions, organisations and agency. This is in line with the works of what she labels a ‘third generation’ of nationalism scholars: They claim that nationalism is in fact a modern phenomenon of the 20th and 21st centuries, which is historically, institutionally, organisationally and micro-organisationally grounded.

Using her own analytical framework, she shows how Nordic composers at the end of the 19th century contributed to two different types of national projects: one revolving around the establishment of national cultural institutions (in Finland and Norway) and another centring on the transformation of these institutions (in Denmark and Sweden).

In a co-written article with scholars from Hong Kong, the USA, Israel and Argentina, Claire Maxwell examines whether and how globally mobile middle-class professional families engage in practices of nationalism through forging connections with a ‘home nation’ despite continually relocating for work.

Based on data generated with 18 families living abroad, the authors conclude that there does not appear to be empirical evidence to support the theoretical assertion that members of the ‘global middle-class’ have blurred or non-existent relations to nation states. On the contrary, the study shows that there is indeed a strong desire among the families to cultivate a sense of national belonging in their children through the promotion of language acquisition as well as practicing of cultural or national rituals and traditions.

The researchers introduce the concept of ‘mobile nationalism’ to make sense of the ways in which the parents cultivate a sense of identity, coherence as well as the necessary resources to facilitate the future mobility of their children.

“In an era of intense globalisation, understanding how mobile subjects articulate a national identity, one which is often connected to a nostalgic and partial understanding of that nation, is important. These particular representations of the nation can go on shape relations between people of different nationalities, and may, in turn, allow for a re-thinking of how we see ‘Others’,” Maxwell says.

Benedikte Brincker: On the Roles of Institutions and Agency in Nationalism and the Relations between Them: A Theoretical Enquiry into the Study of Nationalism, Its Present and Future