Professor Claire Maxwell has contributed to a special issue of the British Journal of Sociology of Education celebrating its 40th anniversary. 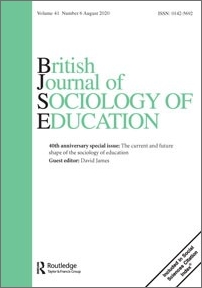 The article titled ‘Cosmopolitan nationalism in the cases of South Korea, Israel and the U.S’ is one of 11 papers chosen after a ‘limited open’ call for submissions that would address “the current and future shape of the sociology of education” – a perspective that also became the subtitle of the anniversary release.

Maxwell’s contribution, co-written with Miri Yemini, Laura Engel and Moosung Lee, develops the concept of ‘cosmopolitan nationalism’, offering a working definition and suggesting ways sociologists of education might draw on it in their future work.

The authors’ article shows how the concept is a useful analytical lens through which to examine contemporary policies and practices that navigate global processes (such as ranking systems, mobility of people, expectations for futures). At the same time, the paper also takes account of nationalistic tendencies, as well as local and national attempts to challenge persistent inequalities within education systems.

By using policy examples from South Korea, Israel and the US, the authors illuminate how cosmopolitan nationalism is evident across various initiatives in these countries, and the varied implications this has for education systems in terms of equality, access and quality.

The article can be accessed here: ‘Cosmopolitan nationalism in the cases of South Korea, Israel and the U.S’

The editorial by David James, chair of the Executive Editorial Board, is open access. Here he introduces the special issue and the history of the journal: 40th anniversary special issue: the current and future shape of the sociology of education.